Support Us
Ancient Astronomers Visit the Area
By Ken Drummond
​Known for its spectacular starry skies, Morongo Basin has been the destination for recent visits by a number of famous astronomers, some of them from several hundred years ago. Galileo, Johannes Kepler, and Edmund Halley gave interviews during their appearances.

Here is a recap of their remarks during visits to Sky’s The Limit events at Luckie Park on the occasions of the solar eclipse and Venus transit: 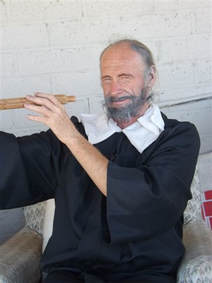 ​Galileo
Ken portrays the historical figure of Galileo.  At a Discovery Day Event

My name, she’s Galileo. I lived a longa time ago, about 400 years ago. In my time, they didn’t have a telescopes like they do now. What they had in those days was a spy-glass. They used them for looking at ships out at sea. I heard about these spy-glasses and I made a better one. And then I started to use it to look up in a the sky.

Then I saw moons a going around a Jupiter. If Jupiter had moons, it must be a planet like a the Earth. I also saw that Venus has phases like a the Moon does. So that showed that a Venus goes around a the Sun.

Well a my problem was that a the Pope had a problem with all a my ideas. Finally they told me to stop teaching that the Earth goes around a the Sun. They put a me under house arrest and I had to stay there the rest a of a my life. But now, everybody she’s a believe that the Earth goes arounda the Sun, and it’s a nice a to see all the new discoveries that have a been a made a since a my a time.
Johannes Kepler
I am Johannes Kepler. I wanted to find the orbit of Mars. Like everybody at that time I assumed the orbits of all the planets were circles. Because God would only make everything perfect, He must have made the orbits circular.

But the data didn’t match up. Finally I tried other shapes for the orbits. I tried an oval (egg-shape) but that didn’t work. Eventually I tried an ellipse. And - amazingly - that worked. The orbital data for Mars fit exactly the shape of an ellipse. Then I realized that all the planets had elliptical orbits.

So for the first time I was able to make good predictions about how the planets moved around their orbits.


Jeremeiah Horrocks
Hi, my name is Jeremiah Horrocks. I was the first person to see a Venus transit. Well, me and my friend William Crabtree.

I was only 21 years old. I was looking at Kepler’s data on Venus transits and I realized he had made a mistake in his predictions.
I realized that there would, after all, be a Venus transit in 1639.

So I set up my telescope, and also told my friend William Crabtree, who set up his telescope.

On the afternoon of December 4th, 1639 I looked through my telescope and what did I see? Nothing! The sky was covered in clouds. I just sat there rather dejectedly, then after awhile I happened to look through the telescope again. And this time, amazingly, the clouds had parted and I saw the tiny disk of Venus moving across the face of the Sun. It was the first time anyone had ever seen a Venus transit. And the next one would not occur for another hundred and twenty-two years!


Edmund Halley
You might recognize my name. It’s associated with a very famous comet. You see, they used to think that Halley’s comet was a number of separate comets. But I realized they all appeared exactly 76 years apart. So I predicted that the same comet would return in 1758.  And when it did it proved my theory and ever since then it has been called Halley’s comet.

I also was very interested in the next Venus transit that would be appearing in 1761. I wrote letters to astronomers encouraging them to travel to various parts of the Earth to make measurements of the transit. In this way I thought that we could get an accurate measurement of the distance of the Sun from the Earth.

Unfortunately I didn’t live to see either the next Halley’s comet or the Venus transit. But here are a couple of chaps who were there for those events.


Mikhail Lomonosov
My name is Mikhail Vasilyevich Lomonosov. I am astronomer from Russia. Probably you’ve never heard of me. That’s not surprising. I never got much credit for my discoveries, at least not in Europe or America.

I was there to see Venus transit in 1761. It was incredible. But I noticed amazing thing. The edge of Venus looked very fuzzy. I am thinking, “What can make fuzzy edge to planet Venus?” Then I realized. It must be atmosphere. Venus must have heavy atmosphere and I was seeing it edge on. That was first time anyone realized Venus had atmosphere.

Of course, in Europe and America, I never got credit. William Herschel discovered Venus atmosphere 30 years later and he got all the credit. Also, I invented special kind of telescope that Herschel also invented much later, and now that is called Herschel telescope.

So, still probably you won’t remember my name, but just remember - is only because I lived not in America but Russia.

Captain James Cook
On the first of my three voyages around the world I was asked to take measurements of the Venus transit of 1769. For the sighting the British Royal Society sent me to the far-off south-sea island of Tahiti.

We arrived there in good time and set up the telescopes and other instruments for the measurements. Unfortunately the sightings were rendered inaccurate by the presence of a black drop that appeared as Venus was transiting across the edge of the Sun.

There was discrepancy between my measurements and those of the other astronomers on the voyage, and the Venus transit part of the mission was not as successful as had been hoped.

And as you may have heard, my third voyage ended in disaster when I was killed by natives on the Sandwich Islands, now called the islands of Hawaii. But that’s another story...

In Closing
Our thanks to Captain Cook and the other astronomers. Though it can be difficult to track down and obtain interviews with such famous personages as the above, especially since they lived long ago, Sky’s The Limit has been remarkably successful. In fact, we have invited them (and others such as Albert Einstein and Edwin Hubble) to speak at the Starry Nights Festival at the Hi-Desert Nature Museum on September 15.