THE MOVEMENT OF TIME
GASSHO 2 is simultaneously a sculpture, a sundial, and a solar calendar by artist Ben Allanoff.
“GASSHO” is the Japanese word for the gesture made by pressing one’s palms and fingers together, pointing toward the sky. It is a traditional gesture meant to express appreciation. In this case, appreciation for the sun and the way it provides the energy for all life on our planet. This installation is called Gassho 2 because this is the second location where this sculpture/device has been installed.
The shadow of the tallest pole (called the “style”) crosses a square red marker on the diagonal every hour, moving from west to east as the sun rises and then sets, and in this way keeps track of the passage of the daylight hours.
The shape at the tip of the style is the oldest known symbol for the sun, a Sumerian cuneiform pictogram originally made by pressing reeds into wet clay.
At mid-day on the summer solstice (the longest day of the year) the shadow of this figure falls on the nearest white marker; at mid-day on the winter solstice (the shortest day of the year) the shadow falls on the far marker; and at mid-day on the spring and fall equinoxes (when daylight and darkness last the same amount of time) the shadow falls on the middle marker. In this way the sculpture functions as a solar calendar, keeping track of the changes of the seasons.
Because here in Twentynine Palms we are 4 degrees of longitude east of the Pacific Standard Time Meridian, the sun is directly overhead here fifteen minutes before your timepiece shows “noon”. The stone markers are placed according to local time (aka solar time), which is different than standard time or daylight savings tim
Some other differences between solar time and clock time:
The earth travels in an ellipse, not a circle, around the sun. It also moves faster along its orbit when it is closer to the sun as compared to when it is further away. These two factors combine to make some days a little bit longer than others, with a difference of about 30 minutes between the shortest day and the longest. “Day” in this case does not refer to daylight hours; it refers to the length of time it takes for the earth to make one complete revolution.
Finally, the ground here at Sky’s The Limit slopes, and in order to work perfectly sundials must sit on a perfectly flat surface, so unfortunately there are some irregularities with the time keeping. Our apologies.
When your watch and the sundial differ, which one is correct?
If the earth stopped spinning or orbiting the sun, what would happen to time?
To directly experience the spinning of our planet, watch the shadow of the style move across the ground, or watch the sun appear or disappear over the horizon. 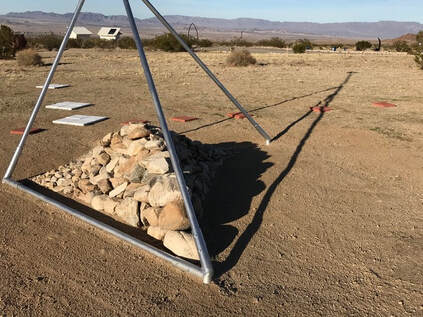 THE PILE OF STONES
The stones arranged beneath the steel sculpture were gathered from the alluvium that you are now standing on. These rocks have eroded from the mountains to the south and traveled downslope – under the combined influences of water and gravity, over the course of many, many years – to this site, breaking apart and getting smaller along the way. The arrangement of rocks within the legs of the sun dial embodies the geologic processes all around you, and it is also a concentrated embodiment of time . . . mountains turn into sand, sand turns into mountains.
The slope of the rock pile is its “angle of repose” – the steepest incline in which the rocks can be stacked without slumping. What is your angle of repose?
Each rock has its own unique history.
How many kinds of rock are here?
How are they the same? Different? 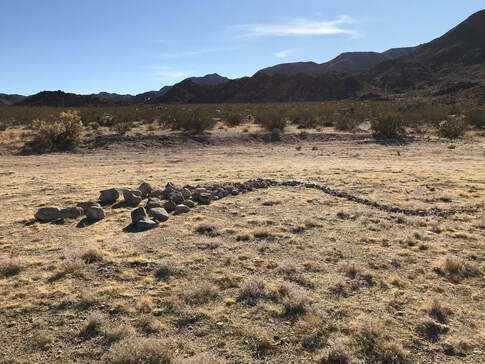 The arrangement of stones beneath the steel sculpture is meant to remain untouched by human hands, so please - DO NOT TOUCH THE ROCK PILE.
Over time this rock pile will decompose under the influence of natural forces. This change in form, driven only by wind, rain, gravity, and plant growth, is an intentional and integral part of the artwork.
There is another collection of rocks on this field, about twenty yards to the west.
We invite you to arrange these rocks any way you please; these rocks are meant to be an endlessly changing sculpture made by visitors to Sky’s The Limit.
Within the National Park the moving of rocks or other natural material – for artistic or any other purpose – is prohibited, so please do it here.