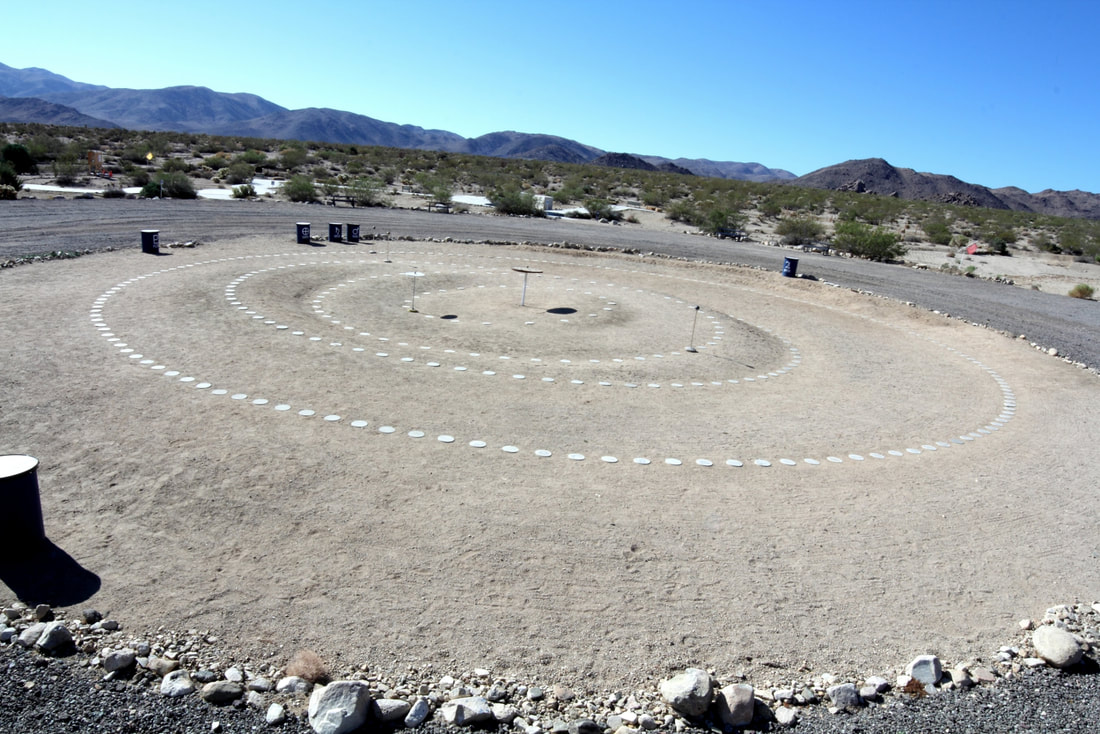 WHAT IN THE WORLD IS AN ORRERY?
By Ken Drummond
An Orrery is a model of the Solar System, usually constructed as a clock-work mechanism that sits on a desktop. A large,
outdoor “human” Orrery is located just a few hundred yards before the north entrance to Joshua Tree National Park at SKY’S THE LIMIT Observatory and Nature Center in Twentynine Palms, California. This Orrery is visible from space! Zoom in with Google Earth and you will see it.

This is called a “human” Orrery because live participants demonstrate the scale of the Solar System and the motion of the
planets as they revolve around the Sun. By walking out the motions of the planets, participants see first hand how the Solar
System operates.

THE HUMAN ORRERY STORY
The Orrery began as a simple way to visualize the planets. The first task was to place rocks on the ground to represent the
planets and their distance from each other. The first four planets were relatively close to one another, but the next four required a certain amount of hiking in order to visit them.

20 BILLION TO ONE
The next step was to place the planets in the proper places in their orbits. The JPL NASA Horizons website will calculate the
positions of the planets for any time or date. Using this data we wrote some simple computer programs to calculate the distances to the planets-at a greatly reduced scale. The scale we used was 20 billion to one. In other words the planets in the Orrery are 1/20 billionth the size and distance of the real planets.

STEPPING OUT THE ORBITS
The orbits of the inner planets are marked out using stepping stones. Each stepping stone represents four days of travel around a planet’s orbit. Several people can “impersonate” planets and walk around the orbits counting the stones at the same speed. You will notice that Mercury’s orbit is completed very quickly, but it takes much longer for Earth and Mars to complete a trip around the Sun. 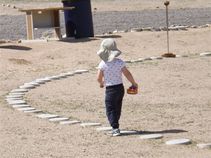 Young learner walking the Solar System. 4 days with each step following Mars path around the Sun.
The planes of the orbits are inclined or slanted. Each planet’s orbital plane is inclined a different amount, relative to Earth’s orbital plane. When you go around Mercury’s orbit, for example, you will be walking up and down a small hill over and over. This feature of the Orrery demonstrates the actual angle of the planets’ orbital planes, and is unique among orreries, as far as we know.

The planet markers show the current positions of the planets. All the planets move around their orbits in a counter-clockwise direction. If you are only familiar with digital clocks, “counter-clockwise” means that when you are standing facing the Sun you walk to your right.

ORRERY HISTORY
The word Orrery comes from a solar system model that was made around the year 1700 and presented to Charles Boyle in England. His title was The Fourth Earl of Orrery. So after that time, models of the solar system became associated with his name, and were called orreries.

TRUE SCALE & POSITION
We call this Orrery a True Scale and Position (TSP) Orrery. Since the Sky’s The Limit Orrery is true to scale, everything is the same size, relatively speaking, as the real Solar System. For instance when you stand at the Earth marker and look at the model of the Sun, in the middle of the Orrery, then look up at the real Sun (with appropriate eye protection), you will see that they appear to be the same size. They are not the same size of course, but they appear to be.

Likewise, if you have a telescope and aim it across the parking lot at the model of Jupiter, then, if it is nighttime, aim your telescope at the sky-you will see that both Jupiters, real and representative, appear to be the same size.

All the Orrery distances are proportionally correct, including the slopes of the planets’ orbits – well, for the four inner planets anyway. It would have been too difficult to landscape the ground to get the correct inclinations for the outer planets, but the natural slope of the land comes close.

PLANETS FAR AWAY…
We use moveable markers to represent the planets’ positions. The planets themselves are very tiny at the scale we use. The sun is less than three inches in diameter. The four inner planets-Mercury, Venus, Earth, and Mars-are represented by ceramic orbs within the hundred-foot radius of the main Orrery circle. To understand the size of each planet relative to the Sun, feel the very tiny projection on top of the ceramic sphere: that’s how small it is at 20 billion to one! The other planets lie way beyond the driveway. Jupiter and Saturn are on Sky’s The Limit property, but Uranus and Neptune are off in the distance. Pluto is off in the direction of the mountain, and Eris, one of Pluto’s fellow dwarf planets, is about half a mile away.

DWARF PLANETS, COMETS & ARTISTS
Around the perimeter of the Orrery Circle there are a number of large blue pedestals. On these are information and arrows pointing in the direction of the outer planets, dwarf planets, and asteroids. We also track comets as they travel through the Orrery.

Morongo Basin artists contributed their talents to make the Orrery beautiful as well as educational. Sky’s The Limit is very grateful to sculptor Steve Rieman and ceramic artist Ed Keesling for conceptualizing and creating the planet markers, and to Steve Rieman and Bruce Jones for fabricating the information pedestals.

We hope you will enjoy your experience at Sky’s The Limit Orrery. Think of yourself as a cosmic giant walking around the solar system. You are able to view everything from various angles.
INFORMATION ABOUT THE ORRERY
Scale: 20 billion to one
Type: Combined TSP (True Scale & Position) & Human Orrery
Conception & Original Planning: 2004-2005 by Peter Bertain
Current Plan and Construction: 2009 -2011 by Ken Drummond and volunteers
Planet markers created by sculptor Steve Rieman and ceramic artist Ed Keesling
Perimeter pedestals created by Steve Rieman and Bruce Jones
Features:
For more information about the Orrery, visit https://waveofthesea.com/STLorrery.php 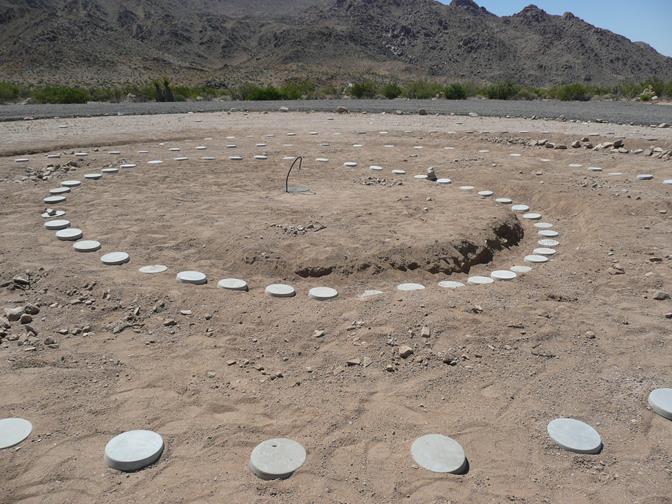